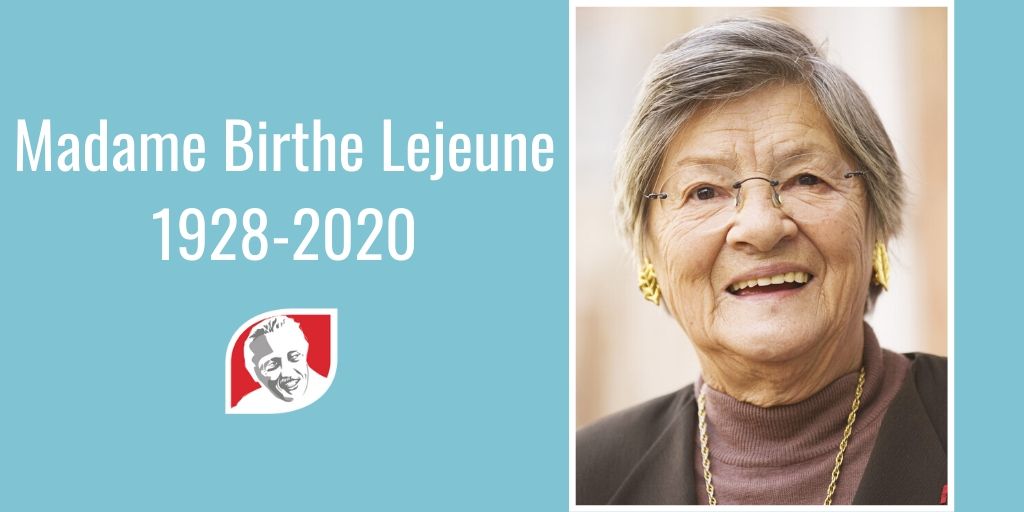 We are saddened to share that Madame Birthe Lejeune, the wife of the late Dr. Jerome Lejeune, has passed away after a battle with lung cancer. Along with her husband, she championed the inherent dignity and infinite value of individuals with Down syndrome, with special care for the unborn.

Born in Denmark as Birthe Bringsted, she came to Paris to study French after the end of World War II. She and Jerome married in 1952, and they had five children together.

In the final stages of his life, Jerome Lejeune told his children “not to worry,” since they would see “how strong and full of capacity your mom is and what she is made of.” True to her husband’s word, Birthe continued his work of caring and advocating for those with Down syndrome, building the Friends of Jerome Lejeune, the Jerome Lejeune Foundation and the Jerome Lejeune Institute to carry on his legacy and continuing “the fight he waged all his life.”

It was her wish to expand the work of the foundation throughout the world, including the United States. The support provided by President Kennedy and other U.S. leaders convinced Birthe that the nation was amenable to cooperating on the issues she and her husband cared so deeply about. Birthe last visited the United States in 2017 touring the country from Florida to Washington, D.C., to Indiana. She met with people with Down syndrome and spoke to pro-life leaders and medical professionals about the life of Dr. Jerome Lejeune, as well as about expanding the Jerome Lejeune Institute to the United States.

Donate to the Legacy Fund today

As she said during a lecture in Washington, D.C. – “Our consultation in Paris is now the biggest in Europe. We want very much that you should have the same thing here in the states.”

Though she did not live to see the opening of the United States medical center which is set to open this fall, we are dedicated to making her and Jerome’s vision a reality.

View photos of Madame Lejeune below:

Read more about Birthe Lejeune on the blog:

Share your thoughts and wishes with the Lejeune family by sending an email to [email protected].