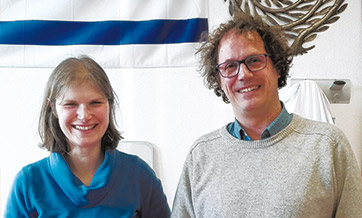 By simple observation and deduction Jérôme Lejeune believed that the gene CBS1 must be on the chromosome 21 and could be involved in the intellectual disorders of people with Down Syndrome. When he died, the Foundation looked into Professor Jérôme lejeune’s intuition and launched the programme CibleS21. Since then, Yann Hérault’s team from the IGBMC2 has proven him right. Recently, the researchers Marc Blondel and Gaêlle Friocourt just reached a new step in their research of CBS inhibitors. They share about their work.

I am a teacher-researcher (professor in cellular biology) at the Faculty of Medicine & Science of Health in Brest. I lead an Inserm research group working on the use of yeast to model various human diseases. I have been working with yeast since I started my DEA and my Ph.D. in Paris. After my Ph.D., I did 4 post-doctorate years at the ISREC in Switzerland, 6 years as a CNRS researcher at the Biological Station of roscoff (France) in Laurent Meijer’s team, and then 11 years in Claude Férec’s Inserm unit in Brest (France) in 2006, which adds up to over 25 years!

I am a researcher at the Inserm. I did my DEA and thesis at the Cochin Institute in Professor Jamel Chelly’s team, who is specialized in the identification of new genes related to intellectual disorders. I then held a post-doctorate position at the London UCL in mice neurodevelopment for 3 years and continued with a second post-doctorate in Professor Claude Férec’s team in Brest where I developed a new project to understand the effect of several mutations of the ARX gene, responsible for various forms of intellectual disorders. Since 2013, I have also been working with Mark Blondel on the CBS gene and Down Syndrome.

Baker’s (or brewer’s) yeast is not only used to make bread or bier. It is also what one would call a model organism: indeed, yeast cells are a simplified model of human cells, a sort of “living test tube” in which all the great control mechanisms of human cells are also present, most often under a simplified form. Besides, at least 30% of human genes involved in diseases have a functional equivalent (homologue) in yeast. Such is the case for the CBS gene. Finally, yeast is much easier to manipulate than a human cell or even a mouse one. For all these reasons, yeast has been used for nearly a century as a model organism, and for about 15 years as a model for various human diseases.

The CBS gene (located on the chromosome 21), involved in intellectual disorders associated with Down Syndrome, has a functional homologue in yeast. The very simple idea of our project was to create a yeast strain that overexpresses the CBS gene in order to reproduce the cell situation of Down Syndrome patients. The overexpression of the CBS gene induces an effect easily measurable in yeast: the absence of growth in a particular culture medium. The effect can therefore easily be used to search, in large collections, the few molecules capable of reducing the activity of CBS. Such molecules will thus become drug candidates to improve the cognitive functions of Down Syndrome patients.

After having developed a yeast strain which overexpresses the CBS gene, we used it to identify, among larger collections of molecules, those capable of decreasing its activity in a cellular context. Among them were about 2000 drug-molecules already on the market and having already received an authorization for marketing for various indications. The idea was that if by chance one or several of these drug-molecules happened to be capable of decreasing the activity of CBS, then a therapeutic repositioning of that very molecule would be an option to consider for the treatment of intellectual disorders associated with Down Syndrome. There are already a lot of examples of such therapeutic repositioning. We were pleasantly surprised about finding several molecules able to decrease the activity of CBS in yeast.

The next step consists of validating the couple of molecules discovered on Down Syndrome mice for the CBS gene, thus presenting a cognitive disorder. This part of the work is carried out by Yann Hérault (IGBMC, Strasbourg) who developed the mice with trisomy 3.

Professor Hérault’s team has already tested the first of our molecules active in yeast: it also turned out active in mice as it was able to suppress their cognitive disorder!

This very important result validates our model yeast and suggests that this molecule, already on the market for another indication and capable of acting on a cerebral level, could potentially be repositionable to reduce the intellectual disorders associated with Down Syndrome.

All this work on mice still remains to be done with the other molecules. We have also identified good leads allowing us to explain the mechanism of action of these molecules and how the overexpression of the CBS could alter cell functioning and thus interfere with cognitive functions; Thanks to the support of the Jérôme Lejeune Foundation, all these results will be confirmed and developed in the next 2 years.

Other pathologies than Down Syndrome are concerned

Molecules capable of inhibiting CBS could also be used in the treatment of various cancers, in which the CBS gene is overexpressed (colorectal amongst others). Researchers having made these observations believe that the overexpression of CBS helps the metabolism of the cancerous cells to adapt. Inhibiting CBS in the tumour should slow down its development.

A technological leap thanks to yeast

The scientific community has long been convinced of the interest of looking for molecules capable of inhibiting CBS to reduce intellectual disorders related to Down Syndrome. Until now, and for practical reasons of experimentation, all research approaches with molecules have gone no further than test tubes (in vitro) using purified CBS enzymes. Our model yeast is innovative as it is the first organism that enables us to look effectively for active inhibitors of CBS in a cellular context close to its normal context. It thus enables us to do quick effective sorting of large collections of molecules potentially capable of inhibiting CBS. The next step, using in vitro mice is much longer, difficult and tedious. Finally, one last aspect, quite original, of our project is the unique association of three complementary skills: expertise on neurodevelopment disorders (Gaëlle Friocourt), transgenic model mice for genetic intellectual disorders (Yann Hérault) and the use of yeast to model human diseases (Marc Blondel).

We hope to identify one or several drug molecules already on the market for other indications. They could be redirected towards treating intellectual disorders related to Down Syndrome. We also hope to better understand how the overexpression of the CBS gene, due to the fact that it is present in triplicate instead of duplicate, alters cognitive functions.

¹ Cystathionine Beta-Synthase
² Institute of Genetics and Molecular and Cellular Biology.
³ Yann Hérault’s team wishes to go further than model mice. It is currently preparing Down Syndrome rats which will soon be able to test the molecules.