New prenatal testing for Down Syndrome: the Jérôme Lejeune Foundation denounces a manhunt

New prenatal testing for Down Syndrome: the Jérôme Lejeune Foundation denounces a manhunt 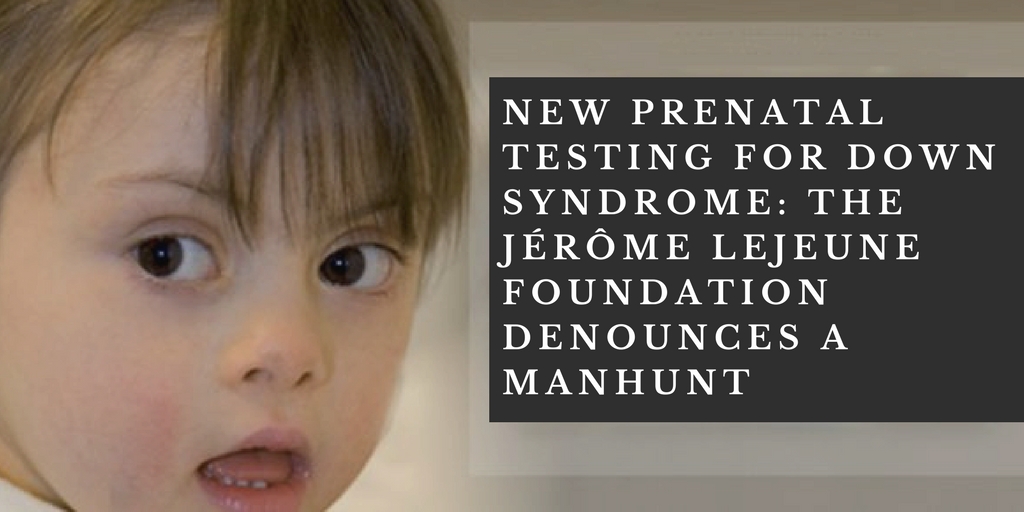 This morning, the French High Authority of Health just made public the second part of its report on the new prenatal test for Down Syndrome.

It recommends suggesting the test “to all pregnant women whose risk of having a child with Down Syndrome lies between 1/1000 and 1/51, risk revealed by the analysis of serum markers. It specifies that the test “does not replace a foetal Karyotype in order to confirm the diagnosis of foetal trisomy”.

The Jérôme Lejeune Foundation wishes to underline certain points which, though essential, haven’t been sufficiently or at all taken into consideration:

1st point: What is now urgent is to end this mass elimination, not achieve a 100% eradication rate

France, in which 96% of foetuses detected as Down Syndrome carriers are aborted, is a leading country in terms of mass elimination of children with Down Syndrome before birth.

The HAS underlines the fact that in countries having developed the new test, the number of foetuses detected as Down Syndrome carriers has increased.

Since prenatal detecting leads to elimination, the insertion of this new test into the health system will lead to an increase in the eradication of Down Syndrome babies.

To what level have French consciences been anesthetized, so that this situation is not recognized as scandalous?

2nd point: the argument using the decrease in the number of amniocenteses is discriminating and pro-eugenics

The argument using the decrease in the number of amniocenteses is a selling argument:

The Foundation reminds of the eugenics nature of this argument:

“Doctors who rely on the argument according to which this new test will help decrease the number of amniocenteses are simply giving out a marketing argument, to help sell the test, all the while stigmatizing people living with Down Syndrome. They justify their answer by praising this decrease in amniocenteses, which causes the death of healthy children. They use eugenics arguments, making a discriminatory distinction between “foetuses with Down Syndrome” and “healthy fetuses”. By speaking of the value of the lives of healthy children, spared thanks to this new non-invasive test, doctors deny the value of children with Down Syndrome. Thus, they trigger a form of discrimination, delivering a violent message of rejection to People with Down Syndrome and their families.” (Jean-Marie Le Méné, president of the Fondation, in “Les premières victimes du transhumanisme”.

Besides, extending the threshold which determines the category of “women at risk (from 1/250 to 1/1000) will increase the number of worried couples.

All the graphics in the world, testing strategies and recommendations of the wisest societies should be put in perspective with the reality of worried couples.

The Foundation reminds the world that the system imposes women to make choices that make them feel guilty. When they are told that their child has Down Syndrome they are asked to choose between eliminating it or giving birth to it (while risking feeling responsible for its disability).

The Jérôme Lejeune Foundation is used to the fact that French health authorities and political leaders make decisions in favor of hunting down Down Syndrome children before they are born. This report from the HAS, published after the decree from 7th May confirming these decisions, is no exception.

This current situation makes the three missions of the Jérôme Lejeune Foundation all the more important: