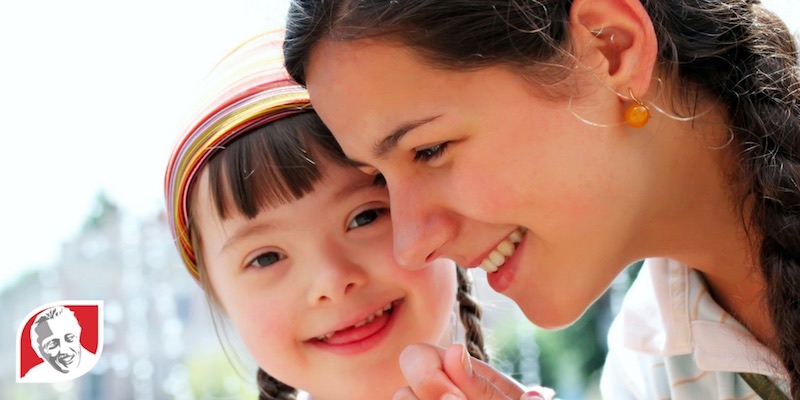 President of Jerome Lejeune Foundation USA David G. Lejeune drafted an open letter today in response to The Washington Post op-ed titled “I would’ve aborted a fetus with Down syndrome. Women need that right” by deputy editorial page editor Ruth Marcus. Please read and share this critical defense of the unborn with Down syndrome. View the Open Letter as a PDF here.

An open letter to The Washington Post Editor Ruth Marcus:

In your op-ed in The Washington Post, you claim that you would have terminated your pregnancies had the testing for each child come back positive for Down syndrome. While you are free to voice your personal opinion, even an ill-considered one, I am compelled to publically refute the statements you made regarding aborting children with Down syndrome. Lives are at stake. If your advice were accepted by others, the lives of innocent children would be eliminated and families would be deprived of loving, beautiful human beings who contribute immensely to human flourishing.

Here are five reasons why your views are dangerous:

I. Eugenics is always wrong

The policy you are advocating has its genesis in the dark world of eugenics, where children are selectively eliminated because something about them is considered to be undesirable. You believe that it is acceptable to terminate a pregnancy if you do not want a child, but you go a step further – you celebrate the right to selectively terminate a pregnancy when the particular child is not wanted.

Eugenics, by its very definition, is “the practice or advocacy of controlled selective breeding of human populations to improve the population’s genetic composition” (Merriam-Webster). Eugenics has a long history that goes hand-in-hand with racism, hatred, and disability discrimination.

We don’t have to go back in history to understand the practical impacts of the policy you are advocating – the elimination of a particular child because something about them is considered to be undesirable. We need look only at China’s “one child” policy to understand the implications. In China, families have been strictly limited to one child, and forced abortions occur by the millions, along with infanticide, to enforce it. In China, there is a traditional preference for boys, and in a one-child world female children are considered to be undesirable. As a consequence, it’s estimated that 100 million female children have been aborted in China.

As a feminist, how do you reconcile tacit support for the underlying principle of eugenics that has resulted in the death of so many female children?

Of course, people with genetic abnormalities or disabilities stand no chance of being accepted in a society that tolerates eugenics. Abortion for the sole reason of eliminating a particular child, one with Down syndrome, is no different that eliminating a child because she is female. It’s simply modern eugenics, and it is wrong. Once you go down this path, where does it end?

I think you know that what I am saying is right, because you are forced to admit that, “There are creepy, eugenic aspects of the new technology that call for vigorous public debate.” But in an “ends justify the means” equivocation, you quickly pivot to affirm that the absolute right to abortion trumps any concern over elimination of human beings with certain characteristics. So you justify abortion of children with Down syndrome in the same way that China justifies abortion of children of the female gender. What’s next? What other characteristics that people might consider to be undesirable should justify a particular child’s elimination? Race? Prospective IQ? Disability like blindness or deafness? The slippery slope you are on has no principled ending point. The issue of whether a child should be allowed to live even if he or she is not wanted due to minor characteristics should not even be a question. We all have a basic right to life.

II. There is no constitutional right in the U.S. to abort an unborn child with Down syndrome

You incorrectly premise your position on the idea that it is a woman’s constitutional right to abort a child with Down syndrome. Yet, this foundation is erroneous! You state that “the Constitution mandates… that these excruciating choices be left to individual women.” In reference to laws in states like Ohio and Indiana that propose making it unlawful to terminate a pregnancy simply because a child has Down syndrome, you write: “These laws are unconstitutional, unenforceable – and wrong.”

You are mistaken. The U.S. Supreme Court has never recognized a right to abort an unborn child because of his or her genetic abnormality or disability. A brief filed by the Bioethics Defense Fund and Alliance Defending Freedom addressing the District Court’s opposition to the Indiana law states it clearly:

“The District Court implicitly and erroneously presumes—without any significant reflection, analysis, or citation of authority—that there exists a constitutional right to abort an unborn child because of his or her sex, genetic abnormality, or disability.

On the contrary, “[i]t is important to make the distinction between a pregnant woman who chooses to terminate the pregnancy because she doesn’t want to be pregnant, versus a pregnant woman who wanted to be pregnant, but rejects a particular fetus…” Picking and choosing among particular children raises the specter of abortion as “a wedge into the ‘quality control’ of all humans…

The [Supreme] Court has never framed the constitutionally protected abortion decision as whether to bear or abort a particular child based on his or her sex, genetic abnormality, or disability.”

III. You appeal to morality, but there is nothing moral about your position

Your article gives a nod to “difficult moral choices”, but then resolves the moral considerations on the basis of ‘everyone does it.’ For example, throughout your piece you state that you are “in good company” – that “[t]he evidence is clear that most women confronted with the same unhappy alternative would make the same decision.” Such a statement merely notes that a course of action is common, it certainly doesn’t make it right, or moral.

IV. The purpose of prenatal testing is not to decide whether to kill a baby

You state that many women who discover that they are carrying a child with Down Syndrome choose to abort their babies. You ask: “Isn’t that the point — or at least inherent in the point — of prenatal testing in the first place?”

The primary purpose of prenatal testing is to understand whether there are any health conditions present that could cause health problems as the child matures. This knowledge can prepare a woman to understand how such conditions may affect the baby’s physical and mental development, and give her the knowledge she needs to take appropriate steps to best care for the child.

Prenatal testing also gives mothers who do not feel they are up to the challenge of raising a child with Down Syndrome time to consider the life-affirming option of adoption. It is disappointing that nowhere in your piece was there a mention of this very important option. If you are truly pro-choice, please consider advocating for the choice of life through adoption, and not merely death through abortion.

V. Your statements devalue the lives of those living with Down syndrome

I am the president of the Jerome Lejeune Foundation USA. We exist to carry on the work of the late Dr. Jerome Lejeune who not only discovered the cause of Down syndrome but called his patients with Down syndrome “my brothers”. You state that we cannot compel “a woman to give birth to a child whose intellectual capacity will be impaired, whose life choices will be limited, whose health may be compromised.” You mention that Down syndrome affects the IQ, independent living, and financial security: “Down syndrome is life-altering for the entire family.”

With an emphasis on the difficulties that may exist when raising a child with Down syndrome, you make the assumption that a more difficult life is not worth living. Your statements, then, imply that in order for a child to be desired, he or she must be highly intelligent, have unlimited life choices and good health, and the ability to eventually live independently and become financially secure.

Is this really the most important list of characteristics? Is this the standard to which we should hold ourselves and our children? I posit that the ability to love, learn, and build relationships are just some of the more important qualities to value in our children. Moreover, it’s my belief, backed up by the experiences of countless thousands of families, that those with Down syndrome add immense love and joy to a family, far surpassing whatever challenges they present. They are sweet, loving, beautiful children who want nothing more than to love us unconditionally. They are the embodiment of the universal truth written on the human heart by our Creator that every life has inherent value and is entitled to human dignity.

Ms. Marcus, today is World Down Syndrome Day as established by the United Nations, and I stand with millions of people across the globe to raise public awareness and support for individuals with Down syndrome. This year we emphasize “how people with Down syndrome can and do make meaningful contributions throughout their lives, whether in schools, workplaces, living in the community, public and political life, culture, media, recreation, leisure and sport.” 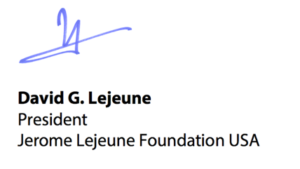 The Jerome Lejeune Foundation exists to defend and care for individuals with Down syndrome. Your fundraising support today will enable us to reach further and advocate better on behalf of people with Down syndrome – including the unborn.

We would greatly appreciate any contribution you can give. Our brothers and sisters are under attack, plainly and openly!

Experts Answer Questions about Down syndrome and COVID-19

Coronavirus Resources for Individuals with Down syndrome