HomeBlogNewsPart of the team: David Saville brings joy to... 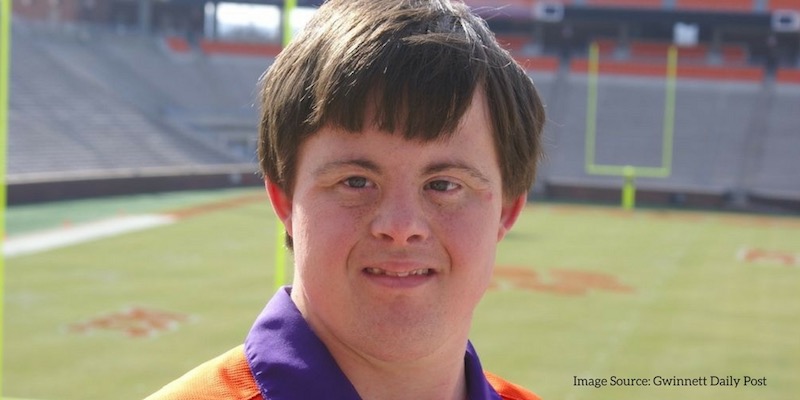 The most-loved individual in the football program at Clemson University isn’t their star quarterback- it’s their equipment manager, David Saville. David, who has Down syndrome, first became an equipment manager at Clemson in 2011, and made fast friends with the members of the team.

“He’s there every single day. He takes unbelievable pride in his job, and he’s a part of our team. He’s got the sweetest spirit,” says coach Dabo Swinney.

“Coach Sweeney is my man. I keep him in line,” replies David.

David was involved in the ClemsonLIFE program, which helps individuals with intellectual disabilities find employment and live on their own. David was the first student to go through the whole program, and he was able to move into an apartment with two of his fellow students in the program, graduating in 2015. He worked as Clemson’s equipment manager throughout the whole experience, and continues to work there today.

David’s always a joy bringer. No matter what’s going on, he’ll always pop in or swing by and immediately bring joy to everyone he’s around, whether that be with a hug, being excited, or breaking out his dance moves.

David has a pattern of excelling at everything he does. In high school, he was an Eagle Scout, played football, and was elected Homecoming King. His father, Bob, attributes it to him and his wife’s determination not to hold David back, stating, “We just assumed he could do everything.”

He hopes that other parents are inspired by David’s example, and encourages them let their kids push the envelope and try things. You never know what they may be able to do.