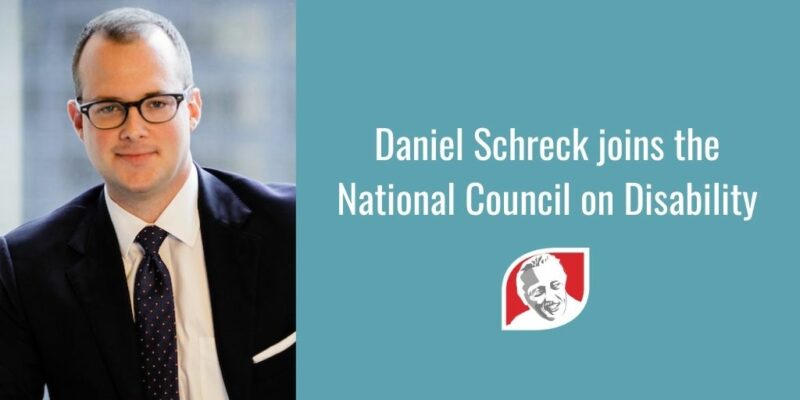 PRESS RELEASE
View the press release as a PDF.

RESTON, VIRGINIA – The Jerome Lejeune Foundation is excited to announce that its U.S. board member Daniel C. Schreck was recently appointed by President Donald J. Trump to the National Council on Disability (NCD). The parent of a child with Down syndrome, Daniel’s advocacy for individuals with Down syndrome is driven by a personal passion and hands-on experience that will make him an effective asset for the council’s work throughout the United States.

“Daniel is a dedicated member of our board of directors, and we congratulate him on his recent appointment to the National Council on Disability. I have no doubt that he will bring excellence in advocacy to the NCD. Daniel has been a key player in our effort to bring stellar healthcare to individuals with intellectual disabilities of genetic origin.”

“We are very pleased to have Daniel Schreck as a member of NCD. His history of believing in the God-given rights of all human beings will serve to advance the full inclusion of people with disabilities in our society, and help make the promise of the Americans with Disabilities Act a reality for over sixty-one million Americans.”

Schreck is a partner at Equinox Partners, a global asset management firm, where he is the head of business development and investor relations. Daniel was previously the founding director of young adult outreach for the Archdiocese of New York and an international marketing consultant for Sony Music.

In addition to his service on the Jerome Lejeune Foundation USA board, Daniel also serves on the boards of Avail, The Knights of Columbus Charitable Fund, The Catholic Artists Society, and the Culture of Life Foundation. Schreck lives in Greenwich, Connecticut with his wife, Annie, and their seven children.

The Jerome Lejeune Foundation carries on the legacy of Dr. Jerome Lejeune, who discovered the cause of Down syndrome. Its work focuses on three core pillars of activities: care, scientific research, and advocacy for individuals with Down syndrome and other intellectual disabilities of genetic origin.