HomeMother-daughter team provides college scholarships for individuals with Down syndromeAll standardsNewsSégolène jumps at 4000 metres “wasn’t even...

Ségolène rushed off for her first free-fall version of flying over her city, between Mouvaux and Bondues. The exploit is not the first take-off for this young girl, who is one of the Foundation’s good friends. Age 29, Ségolène is a very lively young woman, always full of joy. Her independence and her taste for challenges and new adventures is quite admirable.

The plane has just reached 4000 meters and Ségolène is already on another planet. She lets the plane take her up but inside she is bursting with excitement. Since take-off, she keeps repeating “I can’t wait, I can’t wait, I can’t wait”! Today is the big day, at last. With over 3000 jumps on his counter, Jérémie will be accompanying Ségolène for this great tandem. Hardly have they put a foot outside, that our valiant parachutists can feel the air whistling louder and louder around their ears. Jérémie is still holding on but Ségolène is already dangling in mid-air. He heart is now pounding faster and faster as though trying to leap out of her parachutes’ thick padded strap.

She closes her mouth and holds her breath… 5,4,3,2,1, … Go! And off she goes for a more than 200 km/h fall. The thousands of rooftops are rushing towards her at top speed. The descent is breathtaking, and the feeling of freedom has never been greater.

A few seconds and already 2500m have gone. The parachute opens, and suddenly forces them back up, in a reassuring bang. Everything settles down, and then comes the silence. And Ségolène contemplates the view. Her head goes right and left, but also up and down. She is right not to be afraid. The sky is all for her, in a pure moment of grace, living an absolute privilege!

An unspeakable feeling of happiness overwhelms her, “I did it”. She thinks of her parents who must be so proud. The ground gets closer and the small group made up of her fan club cheers. They are all there: her family, her friends, her colleagues and those who carried the project. Over 500 people crowded together to see her performance. How amazing.

Ségolène gently touches the ground and is overcome by emotion. Her tears of joy are contagious and rapidly spread to her parents but also to Bernard Gérard, the local deputy and to the staff of the town hall. Many of them have carried on different levels the project “un grand saut pour l’integration du handicap” (a great leap for disability integration) initiated by the Confédération Générale du Patronat des Petites et Moyennes Entreprises du Nord (General Employers Confederation for Small and Medium Enterprises in the North). They wanted to raise awareness about the integration of people living with a disability in the professional field. Ségolène was the perfect candidate as she is very happy working as a territorial employee at the school canteen. She is in charge of preparing the children’s arrival and the respect of hygienic standards.

From birth, Ségolène was lucky to be personally taken care of by Professor Lejeune, which he did with much care and attention until he died. Ségolène is therefore a good friend of the Foundation’s, as are her parents who, years ago, offered Professor Jérôme Lejeune his very first micro-computer.

More than ever, Ségolène is determined to prove that people living with Down Syndrome can live an independent and fulfilling life . After she left home to move into her own flat, she soared up into the sky but has no intention of stopping there! She repeats over and over again “I’m not scared, I’m impatient”! And there she goes head down into a new adventure.

Ségolène has just integrated a theatre company in which she is the only actress living with a disability, and her role as a waitress in “Le grand restaurant” is already a source of admiration to all those who have seen it. To be continued… 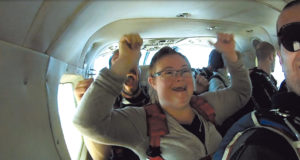