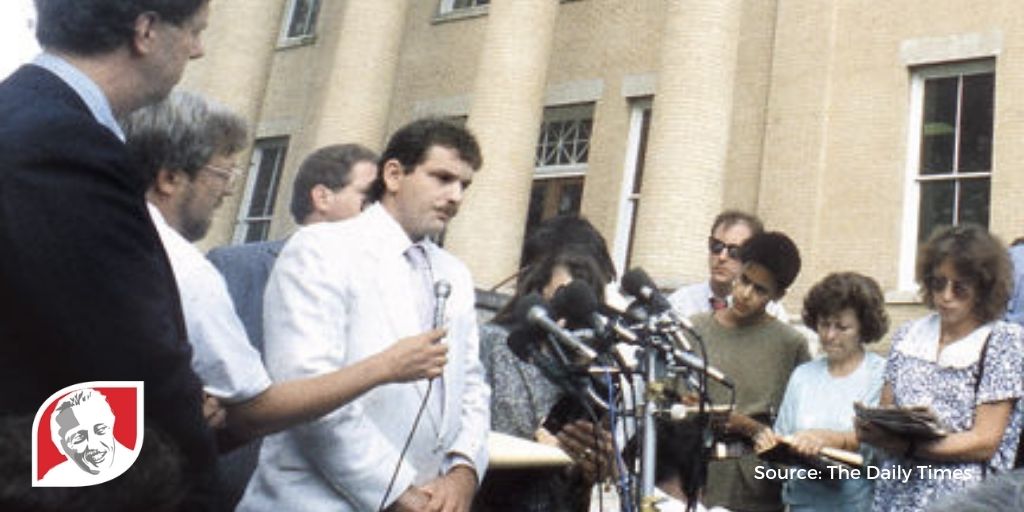 When a couple in the process of divorce was disputing the custody of their frozen embryos, Dr. Jerome Lejeune was called in as an expert witness for his knowledge in the field of genetics. The couple, Mary Sue Davis and Junior Lewis Davis, had created multiple embryos using in vitro fertilization (IVF) after Mary Sue had experienced multiple ectopic pregnancies that had damaged her fallopian tubes and made it impossible to conceive naturally. Two were implanted in a failed attempt, while seven additional embryos remained frozen. 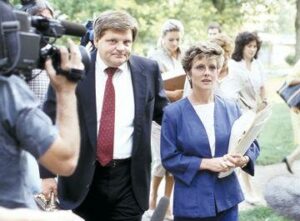 Mary Sue Davis arrives at the trial with her lawyer (Source: The Daily Times)

The Testimony of Jerome Lejeune

When Junior and Mary Sue sought a divorce, Mary Sue pursued custody of the seven remaining embryos, in the hope that she would still be able to bring a pregnancy to term. The trial was held in August of 1989. Dr. Jerome Lejeune came to America at his own expense and testified that they should be considered early human beings, and thus were worthy of being protected:

And at the term of embryo it was said: “The youngest form of a being,” which is very clear and simple definition, and it stated: “it starts as one fertilized cell, ([a] fertilized egg, which is called also zygote), and when the zygote splits in two cells, it is called a two-cell embryo. When it split in four it is called a four-cell embryo.” Then it’s very interesting because this terminology was accepted the world over for more than fifty years by all the specialists of the world, and we had no need at all of a sub-class which would be called a pre-embryo, because there is nothing before the embryo. Before an embryo there is a sperm and an egg, and that is it. And the sperm and an egg cannot be a pre-embryo because you cannot tell what embryo it will be, because you don’t know what the sperm will go in what an egg, but once it is made, you have got a zygote and when it divides it’s an embryo and that’s it.

If we stop the process, if we slow down the movement of the molecules, we progressively come to a relative standstill, and when the embryo is frozen, these tiny human beings, they are very small, one millimeter and a half of a dimension, a sphere a millimeter and a half, you can put them in canisters by the thousands. And then with the due connotation, the fact of putting inside a 19  [degree]very chilly space, tiny human beings who are deprived of any liberty, of any movement, even they are deprived of time, (time is frozen for them), make them surviving, so to speak, in a suspended time, in a concentration can. It’s not as hospitable and prepared to [give] life as would be the secret temple which is inside the female body that is a womb which is by far much better equipped physiologically, chemically, and I would say intellectually than our best laboratories for the development of a new human being…

The Very Beginning of Life

[T]here is no, no difficulty to understand that at the very beginning of life, the genetic information and the molecular structure of the egg, the spirit and the matter, the soul and the body must be that tightly intricated because it’s a beginning of the new marvel that we call a human.

It’s very remarkable for the geneticist that we use the same word to define an idea coming into our mind and a new human coming into life. We use only one word: Conception. We conceive an idea, we conceive a baby. And genetics tell us you are not wrong using the same word; because what is conception? It’s really giving information written in the matter so that this matter is now not any longer matter but is a new man…

If I can say a word as geneticist, I would say: An early human being inside this suspended time which is the can cannot be the property of anybody because it’s the only one in the world to have the property of building himself, And I would say that science has a very simple conception of man; as soon as he has been conceived, a man is a man.

He also compared the custody battle to the Biblical story of Solomon and the two mothers; the true mother of the child was discerned when she preferred the baby to be alive with someone else rather than not alive at all.

The Outcome of the Case

The trial court was moved by the testimony and ruled in Mary Sue’s favor, stating that she should “be permitted the opportunity to bring these children to term through implantation.”

However, the Court of Appeals reversed the case, saying that Junior had a “constitutionally protected right not to beget a child where no pregnancy has taken place.” The case reached the Tennessee Supreme Court in 1992, at which time Mary Sue, who was now married to another man, decided that she no longer wanted to become pregnant with the embryos herself, but wanted to donate them to a couple who wanted to conceive. The Tennessee Supreme Court ruled that the fertilized eggs were “preembryos” rather than embryos and were neither “property” nor “persons”, and what happens to them should rest on the intent of their progenitors:

If no prior agreement exists, then the relative interests of the parties in using or not using the preembryos must be weighed. Ordinarily, the party wishing to avoid procreation should prevail, assuming that the other party has a reasonable possibility of achieving parenthood by means other than use of the preembryos in question. If no other reasonable alternatives exist, then the argument in favor of using the preembryos to achieve pregnancy should be considered. However, if the party seeking control of the preembryos intends merely to donate them to another couple, the objecting party obviously has the greater interest and should prevail.

Thus the court instructed the Knoxville Fertility Clinic to follow its standard procedures for unused embryos, and the embryos expired in storage.