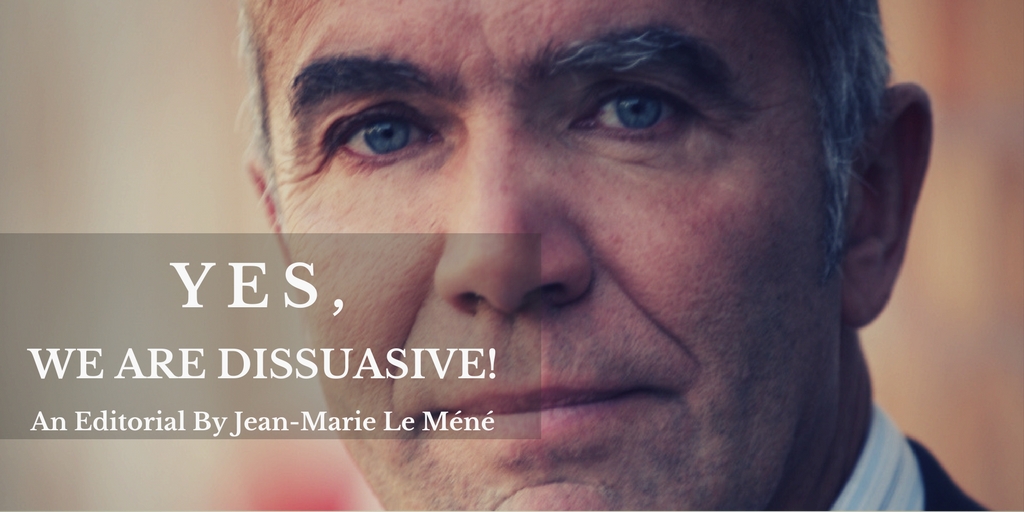 « Not in popular China, under Mao, but in France in 2017, to give out information likely to dissuade a woman from abortion is on the verge of becoming a crime punishable by a fine and time of prison. We should not be so surprised. It has now become clear to all that abortion has become one of the first markers of modern politics. May it be for the Republicans, the National Front, or the socialists, the advantage is in the hands of the best deal, each party regularly coming up with new offers. On the political stage, the brave resistant fighters can be counted on the fingers of one hand.

Already, the CSA’s incredible censure of the Foundation’s short movie, staging young and happy children with Down Syndrome, was a more than worrying indicator. Indeed, the eradication of Down Syndrome being part of an “established order”, expressing the happiness of people who should never have seen the light has become suspect. It is therefore preferable for them to hide away their joy or keep it for themed programs! Although it created appall in the whole world, this decision was indeed based on the fear that the joy of children with Down Syndrome may cause guilt in women having aborted, or dissuade them from doing so. The decision has since then been validated by the State Council; stop the contagion of goodness, truth, and beauty.

With this decision, the Parliament pushes further. It generalizes injustice by instigating a blackout concerning any information relative to the respect of life from the very moment it is considered to be “dissuasive” of abortion. The only rightful information remains incentive information. In reality, we have both sides of a coin. Both decisions -the judges’ and the Parliament’s-  mishandle truth and freedom. In both cases, there is an obscuring of the collective conscience and a form of servitude. I am not sure the world realizes the seriousness of the meaning of this crime sanctuarization and of the presumption of guilt for anyone opposed to abortion.

To paraphrase the famous quote in the movie Casablanca, the Jérôme Lejeune Foundation is put in the box of “usual suspects”, with those who get stigmatized by default. Indeed, as professionals, we do try to beat evil, dissuade our patients from unhappy deeds and maybe unhappiness. We try to give hopeless parents a reason to hope, give specialized consultations to people other doctors don’t care about, encourage researchers to fight diseases that science no longer wishes to fight against because it is easier to give in to eugenics, welcome the lives of those whose lives don’t deserve to be lived in the eyes of the world. Indeed, we do. Actually, it is the only thing we do. But what can you do? Offering life is dissuasive from death. By nature.

Forgive us for listening to those who cry, who suffer or are afraid. Forgive us for reassuring them, accompanying them, helping them. Forgive us also for sometimes managing to dissuade people of carrying out an unrepairable deed. To us, it is just a question of good manners! »

President of the Jérôme Lejeune Fondation

² The Jérôme Lejeune Foundation intends to go against this decision before the European Court on Human Rights.

Unborn Children with Down Syndrome: The Most Endangered Species?

France wants to normalize abortion of babies with Down syndrome

Unborn Children with Down Syndrome: The Most Endangered Species?

France wants to normalize abortion of babies with Down syndrome